Commercial investors are reluctant to invest in early-stage innovations and entrepreneurships in Africa. Why? Because they’re considered too risky. But this particular grant-maker is stepping in to fill the gap. Why? Because it’s worth it. Here’s how venture philanthropy really pays off.

Risk is an important part of my job. I’m the executive of Indigo Trust, a UK based grant-making foundation that provides small grants (usually £10 000 to £15 000) to organisations using web- and mobile-based technologies in innovative ways to bring about social change in Africa.

We view ourselves as high-risk funders and believe that through providing small grants to grassroots organisations across the continent, we allow social entrepreneurs, community- based organisations and technologists to pilot new ideas, with room for trial and error.

It’s a risky business and many of the projects we support are unlikely to achieve scale or financial sustainability. So why do we do it? We do it because we believe a high-risk strategy allows a thousand flowers to bloom. If we encourage people to test out many ideas from many sources, while some will fail, those that do succeed can have an incredible impact at a scale and cost that was almost impossible before new technologies came onto the scene.

Some of these even have the potential to become financially sustainable, removing the on-going reliance on aid that often leads projects to peter out at the end of a funding cycle. But that is not necessarily the point.

You may be asking yourself why a charitable foundation funds projects that many would view as more appropriate for commercial investment from venture capitalists and angel investors – as tech projects often are. It’s a good question and the answer is simple.

Few investors will come in at the critical early stages from ideation to prototype and, sometimes, beyond. While they’re willing to take some risks, they’re seldom ready to take a leap of faith before being confident in their investment. And, for social entrepreneurships – even technology driven ones – this can take a good deal of time.

It’s also worth mentioning that the pool of venture capitalists and angel investors willing to invest in Africa is incredibly small. The continent is viewed as risky for a variety of factors. Firstly, in many countries, the policy environment, high costs and poor infrastructure minimise the likelihood of a project’s success. Secondly, the tech for social change sector is in its infancy and there are only few examples of profitable, scalable solutions for them to draw upon.

So investors entering this space need to adopt new investment models and shift their expectations in terms of returns on investment. Many simply aren’t ready to take the plunge. And this is where we come in – to fill the gap, giving entrepreneurs some breathing space to innovate and optimise their concepts so they’re ready for commercial investors. They may also seek funding from larger donors when they’re ready to scale or become sustainable through partnerships with government or corporations.

While we are happy to make high-risk grants, we do take a portfolio approach, so the risk is managed across lots of different grants. We’re often even willing to take a chance and support passionate, talented individuals who haven’t even established an organisation yet.

Three years ago we awarded a grant of £5 000 to Bosun Tijani and Femi Longe to run a Tech in Governance Hackathon in Lagos. It brought together government officials, techies and activists to explore ways in which technology could improve governance in Nigeria and empower citizens to hold leaders to account. In other words, it was still an idea waiting to happen.

But, with that small grant, the idea became so much more. The two-day event was packed and I was lucky enough to sit on the panel of judges. It was clear that the team really understood how to build a community and stimulate innovation. The concepts being developed were impressive. They included iWatch Live, a platform that enables citizens to track the budgets of government projects and submit reports monitoring their progress. Another one, BudgIT, develops infographics that explain critical elements of Nigeria’s national and state budgets in a simple format, contributing towards more informed public debate (more on BudgIT later).

Following the event, grantees Bosun and Femi expressed an interest in establishing a technology innovation hub in Lagos to support social tech entrepreneurs, and I knew they were the right people to do it. Back in London, I was fortunate enough to stir up interest from the Omidyar Network and together, we funded them to set up the Co-Creation Hub with $245 000.

Walking into the Co-Creation space today, you could easily think you’re in Silicon Valley. It’s buzzing with activity, set on two floors, with a roof balcony and funky furniture. The hub facilities, high-speed internet and collaborative environment have attracted various young tech-savvy social entrepreneurs that the team support from ideation right through to incubation.

Were we crazy to invest in the initial idea from an as-yet unknown and unestablished entity? Possibly, but it was certainly worthwhile, for them and for us.

Impressively, Co-Creation generated 40% of their income independently in the first year and are now aiming for 55%. They’re achieving this through consultancy work and corporate services like training, community relations, business advice and corporate membership. The UK’s Department for International Development has paid them £30 000 for innovation mapping and, to pitch to their community, tech companies have to pay $3 650 each.

The hub has also managed to leverage free internet from West African provider Main One. They’ve been so successful, that the industry is now leading an initiative to turn Yaba, where the hub is located, into an innovation city – a hotspot for a range of stakeholders, with adequate resources and infrastructure for creative ventures to thrive. Fibre optic cables are now being brought directly to the hub, which should help attract even more players to the area.

Clearly Co-Creation is an idea-to-innovation success story. But there are also the successful projects it is supporting. BudgIT, mentioned above, has secured over $500 000 in grants and is already generating some of its own income through providing infographics to banks, the Extractive Industries Transparency Initiative and others.

Another Co-Creation success, Wecyclers, works to collect recyclable waste from households on bicycles in exchange for points that can be managed through mobile phones and exchanged for prizes of household goods. The waste is taken to processing plants for recycling and the team is paid for the raw materials. It’s a win-win-win. To date, around $3 000 of prizes have been collected and Wecyclers has generated $13 000 in revenue, $25 profit per day.

Pledge 51 has developed a Nigerian Constitution app that’s been downloaded over 850 000 times. And Efiko, a mobile Android platform designed to enhance learning through fun and social quizzes, already has over 10 000 users who have played over 150 000 quizzes, and counting. We’ve since invested in both of these projects and are delighted with their progress. How often can a funder say an investment of just £7 000 has reached this many people?

Is sustainability the next step?

It isn’t easy for projects to become financially sustainable in the social space, but a number of models are beginning to emerge. Some work by charging end-users – one of the best examples being iCow (see our article → here) – while others are exploring “freemium” models, where users get free basic access and pay for additional services. There are organisations that generate income through advertising, chargeable services like consulting, data-mining and analysis, or through seeking impact investors who pay for delivery against outcomes, saving governments money in the long-term. Private-public-charity partnerships can also provide a route to sustainability.

But do we expect all the projects we support to be financially sustainable? As a charitable foundation, the answer is quite simply no. Many of the projects we support fall into a category economists call “public goods and services”, an area that has experienced market failure. Yes, there are examples of projects for transparency, accountability and citizen empowerment that generate income. But these are certainly the exception rather than the rule.

That said, money-making models continue to be explored, such as the consulting services offered by BudgIT in Nigeria and UK civic website-building NPO, mySociety. Others, like the Lungisa platform created by Cell Life, which enables citizens in Cape Town township Khayelitsha to report problems in service delivery, aim to outsource their services to other non-governmental organisations.

But, whether they generate income or not, and whether they operate in Africa, the UK, or anywhere else, it’s likely that many transparency projects will continue to need on-going funding to survive. In this case, sustainability demands that they work on keeping operating costs low.

Investing for impact, not income

So what do we look for when deciding whether or not to invest? Crucially, a solution must address a genuine need in society and, in our case, we need to be convinced that technology is the right way to tackle the problem. We want potential grantees to demonstrate a clear Theory of Change. That is, they need to be able to demonstrate how their solution will contribute towards social change, and to show how they will measure their impact.

Clearly, this kind of investment calls for a different kind of risk-management because it delivers different returns. Here are some of the markers and criteria that we use when reviewing proposals for grants…

from small Africa-based organisations using tech to further social change. They have a special interest in citizen empowerment and transparency, but also support projects in a range of social sectors including agriculture, health, education, water and sanitation. Email loren.treisman@sfct.org.uk 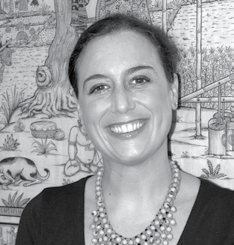 She has a PhD from Cambridge and expertise in international development, governance, health and the use of technology to spur social change. She’s the Executive of Indigo Trust, a grant-making foundation that supports tech-driven projects in Africa, particularly those involving innovation, transparency and citizen empowerment. Loren regularly presents at conferences and writes for the international press, including The Guardian, CNN and the BBC. She was named one of the 20 Powerful Women to Watch in 2014 in The Huffington Post. She also likes to go camping just about every weekend.